We received tremendous interest from our recent article about Rivian Adventure Vehicles, so we decided do a series of articles following Rivian's CEO RJ Scaringe through the brand's IPO and beyond.

Two main threads of feedback from our first article are worth mentioning:

1. The first was how powerful creating a different category called Electric Adventure Vehicles is compared to competing for a segment of the SUV category. We often get this reaction from founders and investors. We found in our research that the category champ takes 76% market cap of the entire category.

Admittedly, this applies to tech companies, but we have a hunch it applies to a much broader set of industries and markets. And given Telsa’s market cap in relation to all the U.S. car manufacturers we believe this is likely to be true for the Adventure Vehicle category. Hence the $80 billion in MCAP.

2. The second was how liberating it was to read the Rivian POV and understand the scope of the category. It literally opened up so many different opportunities and set a huge context for everything that Rivian is doing in Adventure Vehicles, as well as making sense of the incredible pre-order from Amazon for “last mile” trucks. In our book PLAY BIGGER, we talk about sizing the suit. It’s tricky.

On one hand, you want as broad a problem scope as possible to maximize category potential. On the other hand, you want a scope that’s achievable in the next three-to-five years (indeed, sometimes longer) so it’s believable to customers, investors, and analysts. RJ and his team are walking this fine line brilliantly.

Think about that for a second.

The CEO of the leading Electronic Vehicle company says that Rivian (his competition) should have to ship vehicles ahead of their IPO.

This is exactly the kind of response we category designers dream about. It’s validation of Rivian’s POV and potential as well as clear indicator that Elon is concerned he’s going to lose this segment of the market. According to Forbes, Light trucks accounted for a record 75.9% share of U.S. auto sales in 2020, up from 71.7% in 2019. In 2012, a mere eight years ago, trucks were just 53% of the total.

I would be nervous about Rivian if I were in Elon’s shoes, too. It’s the Motherlode!

His "Cybertruck," in my opinion, is not compelling. It looks like an engineer’s idea of heaven, but a nightmare for anyone who has to compete against Rivian. And the video of Elon and his engineer trying to demonstrate how tough his armor glass was is a pretty good indicator it’s not quite ready for prime time.

Not to mention the name: Cybertruck. Really? It's so Nineties and unlikely to appeal to the modern Adventure Vehicles market.

Rivian's announcement this month: "Rivian and The Nature Conservancy Collaborate to Keep Adventure Wild" that they have entered into a strategic relationship with the Nature Conservancy is a classic category design move. This move is possible because they set the problem at a higher level than their product. Their focus on reducing carbon and making the world a better place for our kids is the reason that they CAN do these kinds of moves and have it make sense. 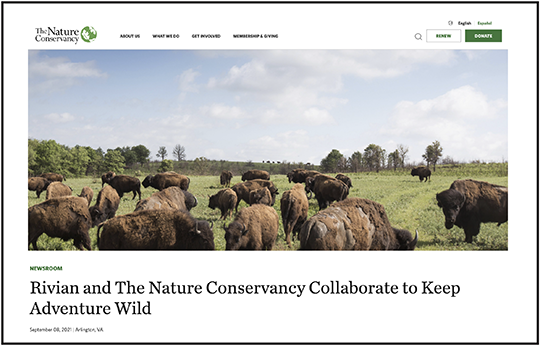 The first paragraph of the release reads:

With this collaboration, Rivian has expanded their ecosystem to include the #1 player in conservation. It’s 100% aligned with their POV and it speaks to Millennial’s desire to preserve our planet, something that has driven Telsa for a decade. It’s a brilliant move, in our opinion.

And while the Tesla response and the Nature Conservancy announcement’s were big positives, Rivian’s announcement that their unique "Tank Turn" feature was not going to ship any time soon was something that category designers fear.

As you know, we are big advocates of publishing a Category Blueprint. It’s what all category champs do to drive their leadership.

For instance, here’s a slide from one of our recent client assignments explaining the purpose of a blueprint:

By definition, a blueprint is a forward-looking statement. It presents a vision for a solution for the CATEGORY, not a product roadmap. In the past few years blueprints have made their way into public filings such as S1’s to great effect.

But there is risk …

As part of their blueprint for an adventure vehicle, Rivian announced their Tank Turn capability. This feature enables an adventurer who has reached a dead end in the road to literally do a 180 and return to safety (It also enables you to redefine doing donuts in a parking lot).

It was announced on Instagram that they couldn’t do it reliably and had to remove this capability. 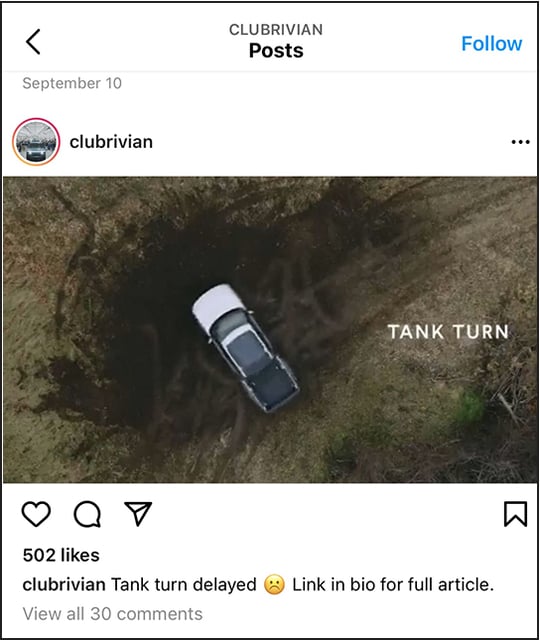 The problem is once you’ve anchored this capability in people’s mind, it’s really hard to remove it. And many of the pre-order folks were vocal about it.

So, perhaps this is the first black eye for RJ and his team.

Last week, Rivian’s first production R1T (their electric truck) rolled off their production line beating Tesla and Ford. So maybe RJ will finally get that monkey off his back. 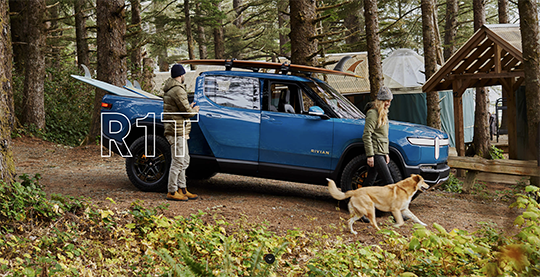 If you are interested in hearing more, I was a guest on the "Lochhead on Marketing" podcast hosted by my fellow co-author and Category Designer, Christopher Lochhead. Episode 127 is centered on the Electric Adventure Vehicle Category and the Rivian IPO. I am sure you will love it.

The Rivian IPO: An Update after the Launch // Lochhead on Marketing Episode 136